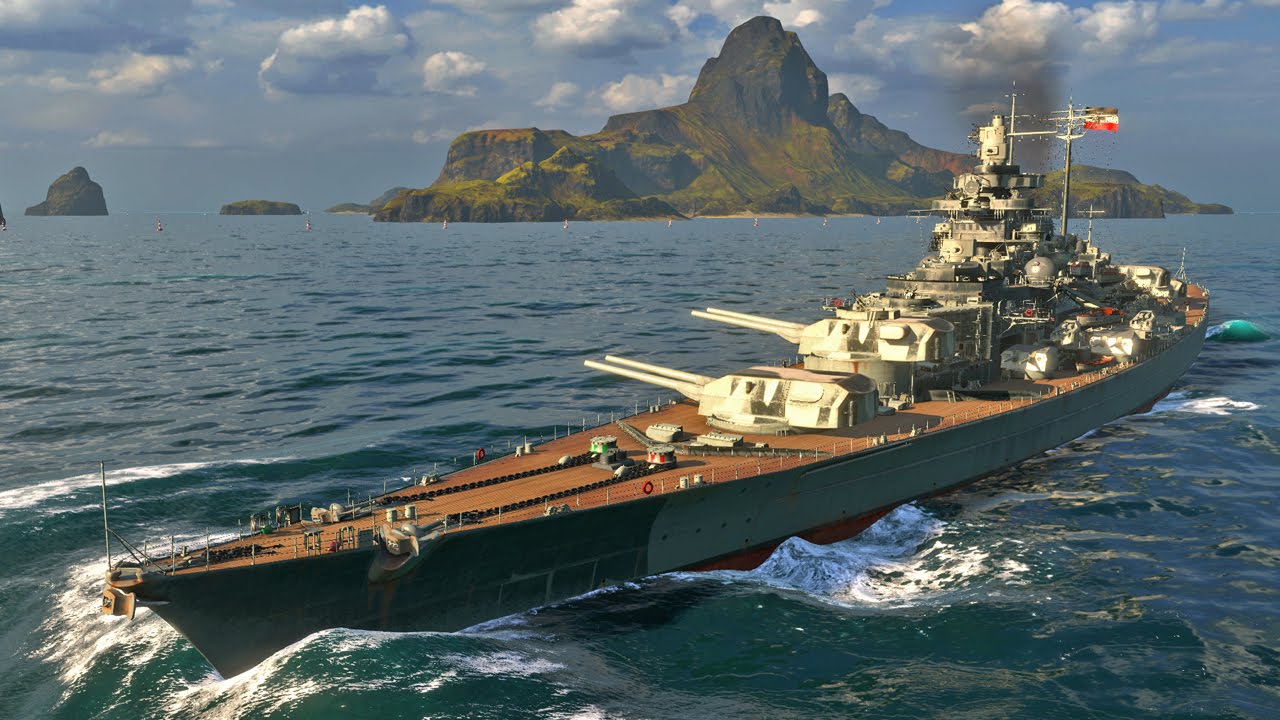 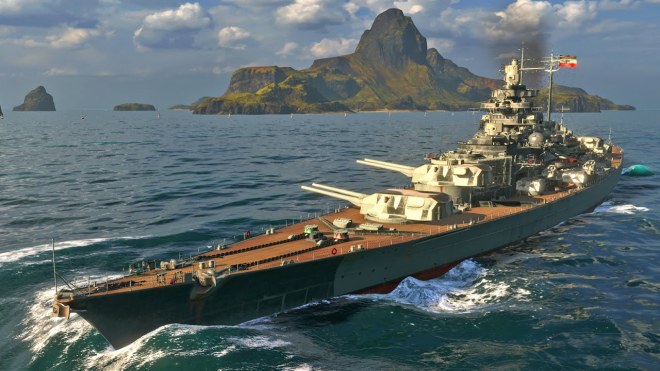 Depiction of Tirpitz in Norwegian waters

Because most of Germany is land-locked, the Germans do not have the seafaring history the British have. Nevertheless, driven by his hatred of the British, Adolf Hitler had ambitions of building his Kriegsmarine, the German Navy, into a force competitive with Great Britain’s Royal Navy.

In World War I, the Germans wreaked ruin on much Allied shipping with their U-boats. In World War II, the Nazi regime would use their U-boat fleet once again to decimate fleets of ships carrying supplies to the countries aligned against Hitler. But Hitler wanted a surface fleet competitive with the Royal Navy. This was the ambition behind the two Bismarck-class German battleships, Bismarck and Tirpitz.

When the two new ships were designed, Germany was still abiding by the limits on the size and fire power of Naval vessels imposed after the Treaty of Versailles at the close of World War I. Thus neither Bismarck nor Tirpitz had the size, speed or firepower of the American Iowa-class battleships that came later. As a result, the two new German battleships were fitted with six 15″ guns in three turrets in contrast to the nine 16″ guns in three turrets that would be installed on the Iowa-class ships. 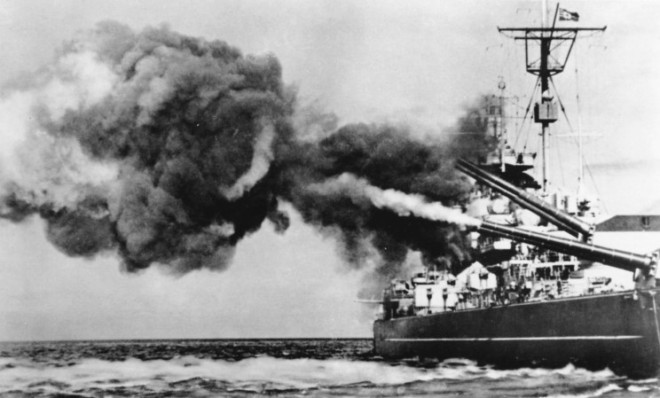 Laid down at Kriegsmarinewerft, Wilhelmshaven on 2 November 1936, Tirpitz was named for famed German naval leader Admiral Alfred von Tirpitz. Christened by the late admiral’s daughter, Tirpitz was launched on 1 April 1939. Work continued on the battleship through 1940. As World War II had begun, the ship’s completion was delayed by British air strikes on the Wilhelmshaven shipyards.

Tirpitz was commissioned in 1941. Displacing 42,900 tons, she posed a grave threat to Allied shipping. Used primarily as a force in being, she saw limited action, spending her war career in Norwegian waters where she was a constant danger to Allied convoys bound for Russia. Her presence obliged the Allies to maintain a large fleet in northern waters to guard against her and repeated attempts were made by both the Royal Air Force and Royal Navy to sink her. 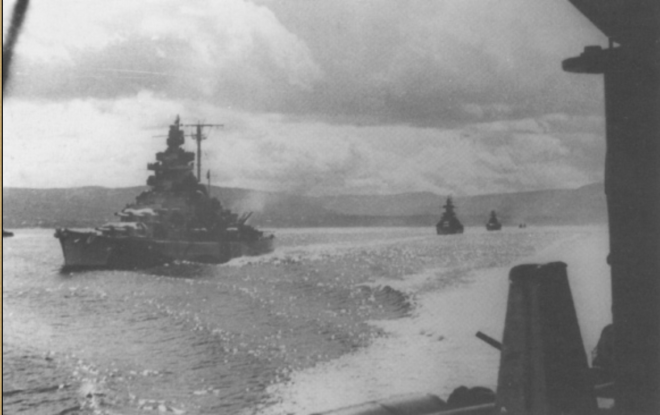 Used primarily as a force-in-being, Tirpitz saw little action in World War II. 5 July 1942:  an exception was Operation “Rosselsprung” (Knight’s Move). German units having assembled in Altafjord (Norway) preparatory to an offensive against the Allied Murmansk convoys, one of the two battlegroups sets out, with Tirpitz leading the heavy cruisers Admiral Hipper and Admiral Scheer.

Tirpitz was first bombed by the Royal Air Force in January of 1941 while being completed in a Wilhelmshaven dry dock. Crews reported that bombs had “straddled” the battleship. Other attacks were made later in 1941 by twin engined bombers and in April, 1942 Tirpitz was located and attacked by Halifax and Lancaster bombers but no bombs found their target. The Royal Navy attacked the battleship on a number of occasions with miniature submarines and carrier based aircraft. 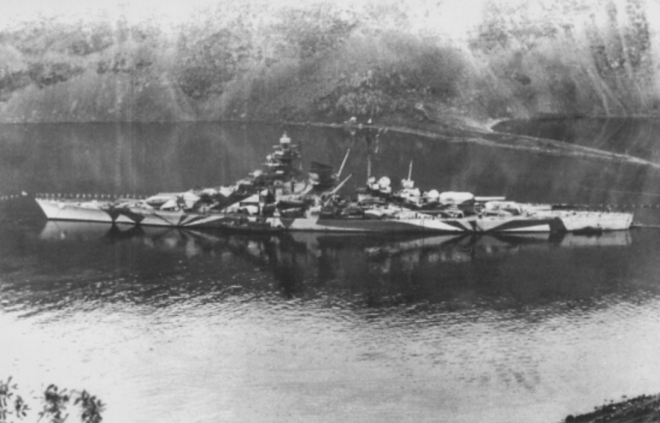 These attacks were somewhat successful but little effect on the battleship’s double layer of armour plate could be expected until British inventor, Sir Barnes Wallis, built a special bomb for the job. Wallis had previously developed the bouncing bomb used in the Dambusters Raid. In 1944 he devised the “Tallboy”, a 12,030 pound weapon capable of piercing the Tirpitz’s 13″ thick armour plating. 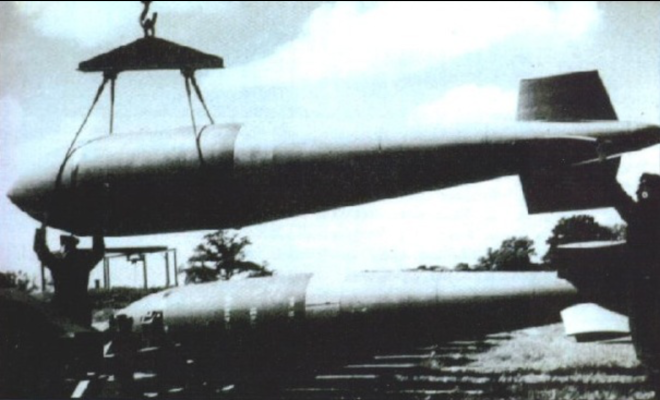 On 11 September 1944, 38 Lancasters of Squadrons 9 and 617 set out to fly to an airfield in Northern Russia which was to be used as a base for an attack on the battleship which was at anchor in Kaa Fjord in Northern Norway. Several of the bombers were forced to crash-land and only 27 took off on 15 September. Twenty of the 27 planes were carrying Tallboys.

With mountains screening the Lancasters’ approach from enemy radar, Tirpitz was caught by surprise and her smoke screens were late in starting. One Tallboy smashed through her forecastle and burst deep in her hull. The shock caused by the explosion of this bomb or possibly other bombs which were near misses, also damaged the ship’s engines. All of the Lancasters returned safely to the airfield in Russia. The Germans decided that it was not practical to make Tirpitz fully seaworthy again and she was moved to Tromso, further south in Norway, but only for use as a semi-static, heavy artillery battery.

The British were not aware of the extent of the damage and Tirpitz was attacked again on 29 October. 37 Lancasters were dispatched from Lossiemouth, Scotland. With the removal of the Lancaster’s mid-upper gun turrets and the installation of extra fuel tanks, Tirpitz could now be reached directly from Britain, although it required a 2250 mile operation.

The weather was ideal for the attack until an unexpected wind shift covered Tirpitz with cloud just thirty seconds before the first Lancaster was ready to bomb. 32 aircraft released Tallboys on the estimated position but no direct hits were scored. The Germans responded by basing a fighter wing at a nearby airfield.

The final attack took place on 12 November 1944. Thirty Lancasters from No. 9 Squadron led by A.G. Williams and No. 617 Squadron led by Wing Commander J.B. “Willie” Tait took off from Scotland. The weather was clear as the bombers flew at 1,000 feet to avoid early detection by enemy radar prior to rendezvousing at a lake 100 miles southeast of Tromso. The attacking force then climbed to bombing height – between 12,000 and 16,000 feet – and the warship was sighted from about 20 miles away.

For some reason, despite frantic calls for air cover to the German fighter base at Bardufoss, not a single fighter seems to have taken off. There was no smokescreen as the Lancasters passed over the last mountain and the fjord with the Tirpitz came into view. When the bombers were about 13 miles away, the anti-aircraft guns of the Tirpitz opened fire and were then joined by shore batteries and two flak ships. The bombs were released and the crews waited thirty long seconds for the results. The first bombs narrowly missed the target, but then a great yellow flash burst on the foredeck and Tirpitz was seen to tremble as it was hit by at least two Tallboys. A column of steam and smoke shot up to about 300 feet and within a few minutes the ship had started to list badly. It then suffered a tremendous explosion as the ammunition magazine went up. She rolled over to port and capsized. About 10 minutes after the first bomb struck, Tirpitz had completely turned turtle with only the hull visible from the air. Approximately 1000 of her crew were killed. None of the attacking aircraft were significantly damaged and all returned safely to base. 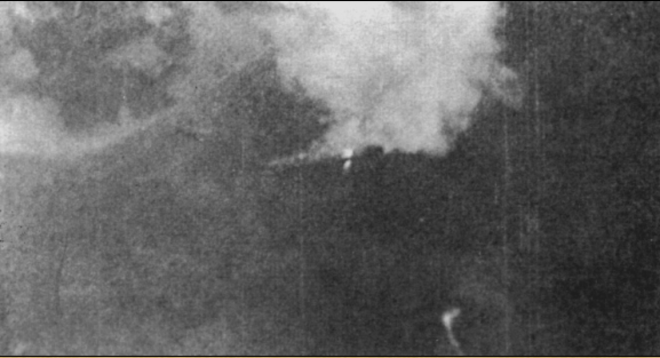 Direct hit! A “Tallboy” hits Tirpitz. An explosion in an ammunition magazine ripped the ship apart and she capsized and sank.

With the sinking of the Tirpitz, Hitler lost the last influential ship of his surface battle fleet and this marked the end of Germany’s naval war in northern waters. The wreck of Tirpitz remained in place for the remainder of the war and was later salvaged between 1948 and 1957.

The capsized Tirpitz in Norwegian waters.

Another reason to support Chick-fil-A: Their restaurants honored those who served in our military with “Missing Man” tables this Veterans Day weekend. 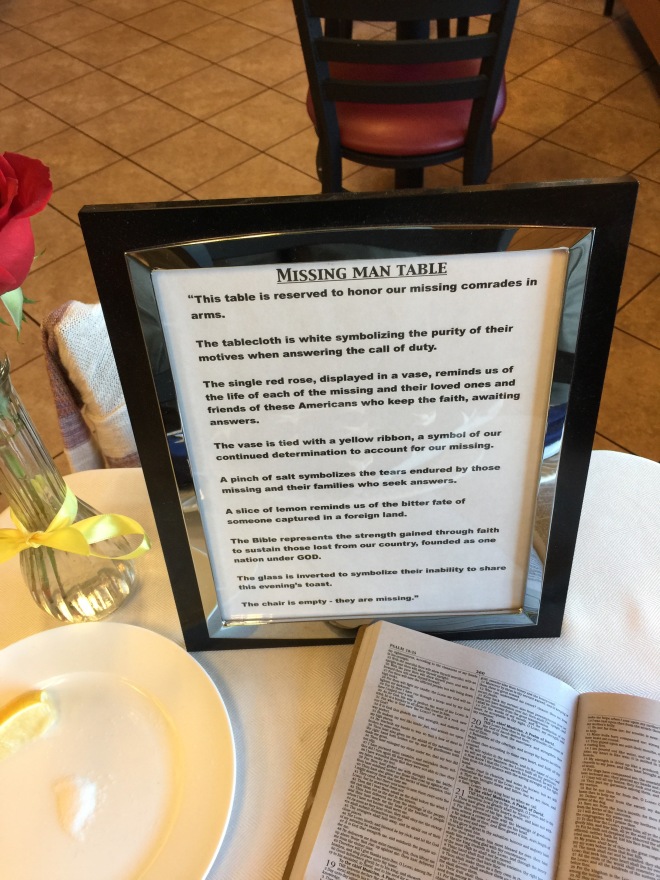