The curved dash Olds was once the best-selling car in the U.S.

On 12 December 2000, General Motors announced that it would begin to phase out the 103-year-old Oldsmobile, the oldest automotive brand in the United States. Oldsmobile had once been one of the most venerable and innovative American brands. Olds cars were the first to have decorative chrome trim, for example, and the first to have fully automatic transmissions, but a GM reorganization in the mid-1980s had drained the brand of most of its unique identity.

Lansing, Michigan native Ransom Eli Olds created the Olds Motor Works in 1897. Ten years before (reportedly because he did not like the smell of horses), he had built a steam-powered car. After a factory fire destroyed 10 of his 11 prototypes, Olds focused on trying to perfect – and sell – the only car he had left: the small Curved Dash runabout. He was successful: the runabout soon became the nation’s most popular automobile.

In 1904, the Curved Dash became the first mass-produced car in the United States. That same year, Olds investors ousted the company’s founder. Ransom Olds wanted to keep on mass-producing inexpensive cars that ordinary people could buy, while the investors wanted to build pricey luxury automobiles. Four years later, Olds Motor Works merged with Buick to become General Motors. Within GM, Olds was known as the “technology division”: it pioneered V-8 engines in 1915, chrome plating in 1926, the Hydra-Matic automatic transmission in 1937, and the overhead valve Rocket V-8 in 1949. 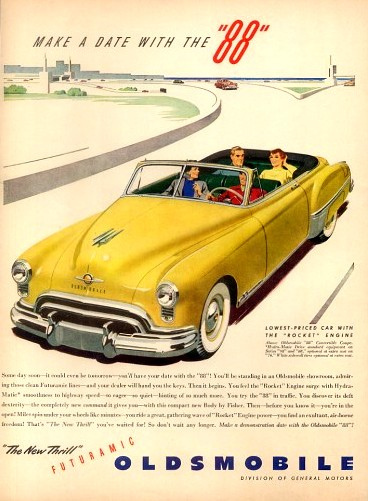 Oldsmobile was the most middlebrow of the GM “ladder of brands,” squeezed between mass-market Chevrolet and Pontiac and luxury Cadillac and Buick. Despite a new slogan – “This is not your father’s Oldsmobile” – that debuted in the 1980s after the GM reorganization, buyers began to lose interest in the brand’s offerings. The brand was also notoriously slow to react to trends: for instance, it was one of the last American carmakers to add sport utility vehicles, the most popular and profitable cars of the 1990s, to its lineup.

Gone were the days of Oldsmobile bringing innovation both to GM and to the car buying public. The innovative front-drive personal luxury coupe of 1966, the Tornado, had by the late ’80s become such a poor joke that it was known as “a car in search of a market” or “an answer to a question no one asked.”

1966 Oldsmobile Tornado – a personal luxury coupe – and the first front wheel drive car made in the U.S. since the Cord of the 1930s.

In 2004, four years after GM made its announcement, the phase-out of Oldsmobile was complete. That April, the last Oldsmobile, a black cherry-red Alero, rolled off the Lansing assembly line and went straight to the R.E. Olds Transportation Museum nearby, where you can see it today.

The name of that model – “Alero” – is another example of the stupidity that had overwhelmed GM causing its decline. “Alero” is a made up name, following the pattern of made up names begun when Esso petroleum – itself a made-up name -became Exxon. What is an “Alero”? What is that name supposed to mean?

Oldsmobile had another model with a made up name that, more than the Alero, begged for ridicule, the “Achieva.” Whoop-de-doo! The joke was it came in 2 models – the “Unda-Achieva” and the “Ovah-Achieva.” The death of Oldsmobile was in indication that the division had under-achieved as a car builder.

After his ouster, R. E. Olds founded REO motors, using his initials for his new company’s name. REO built cars and trucks. REO’s car line became a victim of the Depression, but the truck business soldiered on until the late 1970s. REO introduced one of the first attempts at an automatic transmission, the Self-Shifter, in 1933. The Self-Shifter was a semi-automatic, similar to Chrysler’s Fluid Drive, while it was the Hydra-Matic introduced by Olds that was the first fully automatic transmission.

The decline and eventual end of Oldsmobile (along with the overall decline of GM) can be pinned to the decision in 1959 to take control of GM away from the “car guys” and give the control of the company to Financial Staff in New York. The resulting litany of errors made by the penny-pinching Financial Staff bean counters very nearly caused the end of the entire company, and GM has yet to fully recover. Included in the litany of “penny wise – pound foolish” errors are:
• The GM divisions lost their autonomy in engines. One of the things that made a Cadillac a Cadillac, or a Buick a Buick – was that it had its own engine, developed by that marque’s own engineers and manufactured in that division’s own plants. In the 1970s, the Financial Staff decreed that the core engine for all divisions would be the Olds 350 V-8. From a penny-pinching standpoint, the decision was easily justified by the elimination of multiple engineers designing multiple engines manufactured in multiple plants. The economy of scale for using one basic engine block across all divisions was obvious. But in doing dictating this, the GM divisions began to loose their distinctiveness – and customers. When Cadillac customers began to discover that their cars were powered by Olds engines, they felt cheated and their were a number of lawsuits against GM. Nonetheless, the company persisted for quite some time in using one basic engine block across the divisions, though that has now changed.
• The penny-pinching mentality of the Financial Staff is perhaps best exemplified in the Olds Diesel fiasco. In the late ’70s and into the early ’80s, the run up in oil prices because of OPEC caused a surge in sales of cars powered with Diesel engines. The Financial Staff dictated that the Olds 350 V-8 block become the basis of a GM Diesel V-8. Engineers told the Financial Staff that the V-8 block was not designed to withstand the compression pressures of a Diesel engine and that cracked heads and blocks would result. The Financial Staff wouldn’t back down and the V-8 Diesel based on the Oldsmobile block was introduced and – just as the engineers warned – the resulting warranty claims cost the company more than properly developing a V-8 Diesel. As it was Oldsmobile, still trying to cast itself as GM’s “Technology Division,” that took the lead in offering the Diesel, it was Oldsmobile that suffered the most in lost sales as a result. The death of Oldsmobile is largely attributable to the Diesel engine fiasco.
• Further erosion of brand identity across GM came with the Financial Staff’s decision to take production of many cars away from the respective divisions and assign production the GMAD – General Motors Assembly Division. In step with this was a further erosion of brand identity. While GM divisions for many years had shared to some degree platforms and body shells, it was never to the degree that came in the late ’70s through the ’80s. For example, Chevrolet and Pontiac would share one body shell. The “greenhouse” of the models – sheet metal for the roof and windows – would be the same. Inner door structures and other stampings would be the same. But the sheet metal of the cars would be quite different, giving each brand its own appearance and identity. Likewise, the Buick Special and the Oldsmobile 88 series would share “greenhouses” and many inner body stampings. The Oldsmobile Ninety-Eight, Buick Roadmaster and Cadillac would share “greenhouses” and many inner body stampings, but again would have quite distinctive exterior sheet metal and trim.

Then the Financial Staff decreed that the mid size Chevrolet, Pontiac, Buick and Oldsmobile all share the “A-body,” and be assembled by GMAD. The cars differed only in trim variations, grille and taillight treatment. They became known as “the cookie cutter cars” and GM further reduced the raison-de-être of the various divisions.

The cars assembled by GMAD were notoriously of poor quality. The doors of the X-body cars of the early ’80s were poorly sealed and filled with water in rain and, lacking proper drainage, would retain the water and rust from the inside out.

The most notorious of GMAD operations was the Lordstown, Ohio plant where Chevrolet Vegas were built. GMAD ran the assembly line so fast that 100 cars per hour were rolling off the assembly line, but workers couldn’t properly assemble the cars and the Vega further ruined not only Chevrolet’s reputation, but GM’s as well. The joke was that the Vega was the only car ever built guaranteed to rust out while still on the showroom floor. Assembly workers at Lordstown begged management to slow the line down, but GMAD wouldn’t budge. As a result, angry workers deliberately sabotaged the cars.

By the early ’80s, Oldsmobile’s customer demographics were such that the age of the average Olds customer was 66, a demographic that was beginning to die off. Olds no longer attracted younger middle class buyers on their way up. Thus the “not your father’s Oldsmobile” ad campaign. But no one was fooled. The cookie-cutter cars dictated by the Financial Staff turned off not only potential Oldsmobile buyers, but buyers across all GM brands, Pontiac being another victim of the Financial Staff’s pigheadedness. 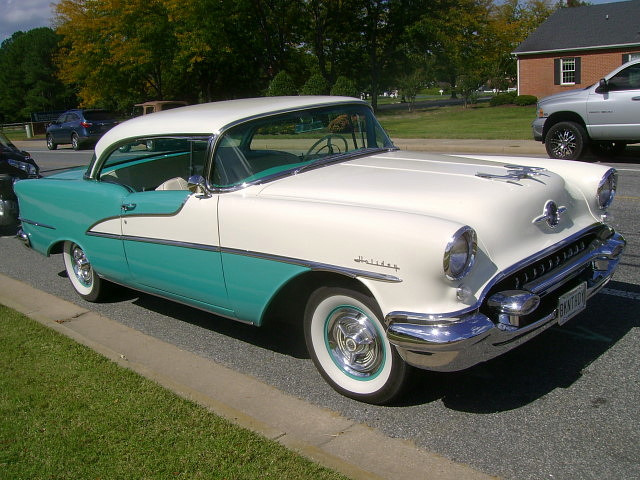 Above: 1984 Oldsmobile 88 Diesel – it differs from a Chevrolet Caprice only in front and rear trim and in interior materials. It was not different enough from a Chevrolet to justify its price – and buyers knew it. The trouble-prone Diesel engine helped kill Oldsmobile.
Below: Oldsmobile Achieva: it under-achieved in sales.