As an independent car builder competing against the multi-line car manufacturers  General Motors, Ford and Chrysler, Studebaker had to be “the mouse that roared.”  Thus came Studebaker’s outsized marketing efforts. One of Studebaker’s first grand gestures was at the Studebaker Proving Grounds outside of the company’s home town of South Bend, Indiana, where Studebaker installed a giant model of a 1931 Studebaker President roadster at the Proving Grounds.

Built of white pine, the monster car was 41 feet long and weighed some 5 1/2 tons. The 7′ diameter tires and wheels were fabricated by Firestone. The entire 22 member Studebaker band could get into the passenger compartment.

Alas, with the advent of streamline styling, by 1936 the roadster looked terribly dated and the company had the giant model car burned. 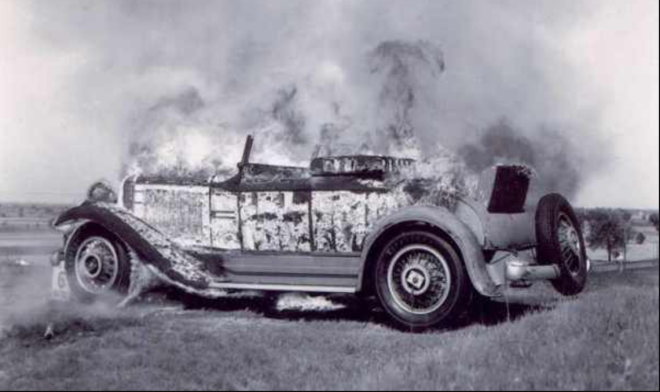 In 1938, with the help of the Civilian Conservation Corps, Studebaker placed white pine trees in a pattern that spelled out “STUDEBAKER.” The area covered by the trees spelling out the company name is 2,000 feet long. Today, some of the trees are 250 feet tall, in contrast to the 50′ tall letters that spell out “HOLLYWOOD” in southern California. 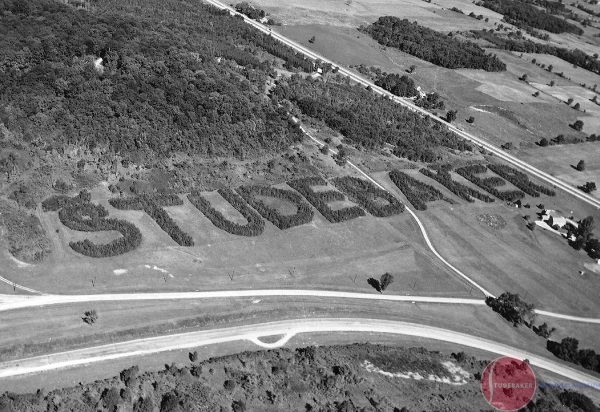 Studebaker quit building cars in South Bend in December, 1963 but continued to build cars in Canada until 1966.

Subsequently, the Proving Grounds have been operated by Bendix, Bosch and, most recently, by Navistar. Bendix donated the woods to the people of St. Joseph County, Indiana and is known today as Bendix Woods County Park. It contains 195 acres and has hiking and bike trails. Studebaker may be dead as a car maker, but the name is evergreen in its 2,000 foot long living sign outside of South Bend. 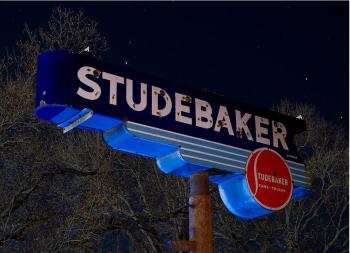