On 1 January 1919, Edsel Ford, the son of Model T inventor and auto industry pioneer Henry Ford, succeeded his father as president of the Ford Motor Company. The younger Ford ascended to the top spot after his father resigned the position in December 1918, following a disagreement with stockholders However, father and son soon managed to purchase these dissenting investors’ stock and regain control of the company.

Edsel Bryant Ford, the only child of Henry Ford and his wife Clara, was born 6 November 1893, in Detroit, Michigan. A decade after Edsel’s birth, Henry Ford (1863-1947) established the Ford Motor Company; five years later, he introduced the Model T, an affordable car for the masses. Henry Ford was also credited with pioneering the moving assembly line and introducing, in 1914, the $5-per-day minimum wage and the eight-hour workday. This made it possible for ordinary factory workers to buy the cars they built and helped to create the American middle class.

As president of Ford Motor Company, one of Edsel Ford’s key contributions was to the styling of the company’s cars. Unlike his father, whose legendary rule regarding the utilitarian Model T was: “You can have any color, as long as it’s black,” he believed that Fords could be stylish as well as functional. In 1922, the Ford Motor Company made its first foray into the upscale vehicle market when it acquired the failing luxury automaker Lincoln Motor Company for $8 million. Edsel Ford, who encouraged his father to buy Lincoln, was involved with developing such elegant, prestigious models as the Lincoln Continental, which launched in 1939 and was reportedly described by architect Frank Lloyd Wright as “the most beautiful car ever made.” Wright put his “money where his mouth was” by buying a Continental. 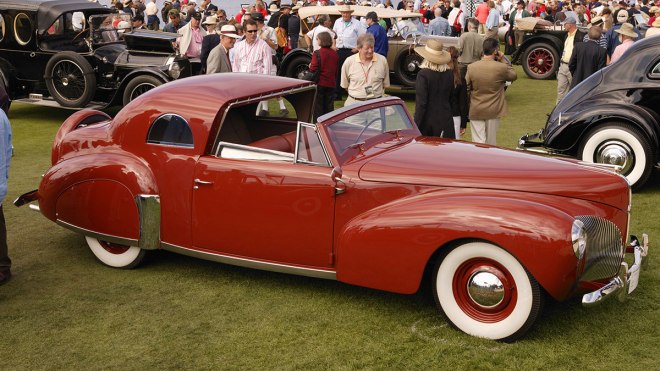 It is ironic that Henry Ford helped create the middle class by paying what at the time was an excellent wage for a days’ work – then became an arch-enemy of the working class by his obstinate and bloody fight against unionization of his plants. Harry Bennett became Ford’s chief of security and brutally fought unionization. Bennett and Ford’s notoriety reached its zenith in the infamous Battle of the Overpass at the River Rouge Plant in 1937. Ford was the last automaker to allow unionization.

The Battle of the Overpass, River Rouge, 1937

Edsel Ford was a philanthropist and patron of the arts. In 1936, along with his father, he set up the Ford Foundation, which grew into a leading global philanthropic organization. (The Ford Foundation has become notorious in recent years for funding far left wing “causes,” most recently contributing to the “Black Lives Matter” radicals.)

In the lead-up to World War II, Henry Ford had become a notorious anti-Semite , isolationist and Nazi sympathizer.

Edsel died of cancer at the age of 49 on 26 May 1943. His father then resumed the presidency of the company. Edsel’s oldest son, Henry Ford II, succeeded his grandfather as head of Ford in 1945 after a bitter struggle with the increasingly senile, obstinate and hostile senior Henry.

Henry II turned the company around with the 1949 Ford. The design of the 1949 Ford is often credited to George Walker, who happily took the credit and used it for his own career advancement. The truth, however, is that most of the design was done by Studebaker’s Robert Bourke and Holden Koto. 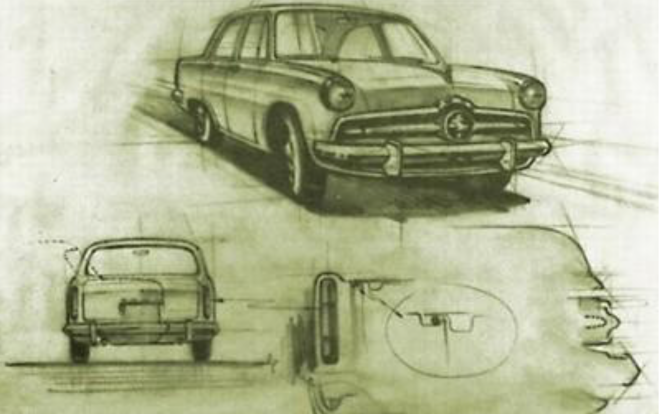 Above: Bob Bourke’s sketch that became the ’49 Ford. The taillight design didn’t make it into production on the Ford, but re-appeared on Bourke’s ’53 Studebaker Starliner.

In the 1950s, the Ford company launched the Edsel car division, named for its second president. The Edsel car was an answer to a question no one had asked. The cars, which debuted with the 1958 model year during the sharp 1957-1958 recession, were plagued with mechanical problems and design issues. The Edsel name came to be synonymous with failure. Ford discontinued the line shortly after the 1960 model year cars were introduced.