Yamato and her sister ship Musashi were two of the largest and most heavily-armed battleships ever constructed. Because of this, they are often written of as having been “Super Battleships.” However, they had two amazing design defects: they were grossly underpowered for their size and they consumed copious amounts of fuel. Throughout the war in the Pacific, Japan was hampered by inadequate fuel supplies. Yamato and Musashi couldn’t keep up with other ships in the Japanese fleet, forcing the rest of the fleet to operate at lower speeds. Because of their slow speeds and large appetite for fuel, the IJN used the twin battleships as a “fleet in being,” keeping them out of combat for most of their commissioned life.

The design of Yamato was a special one – not only was she to be the most heavily armored battleship ever built, her main gun mountings exceeding 18″ would be the largest caliber guns ever fitted on a ship. These elements required a large foundation to operate from and an equally large superstructure to support the floating arsenal. Though to some this may seem a extreme, there was a method to what the Imperial Navy was doing in constructing these ships. The IJN knew that any U.S. battleship constructed to take Yamato on directly would originate from the east coast of the United States. To make it to the Pacific in due time, the new American vessel would have to pass through the Panama Canal to access the Pacific Ocean. If the Americans attempted to build a battleship matching Yamato, the sheer size of the new battleship would deem the Panama Canal route impassable to the extreme.

While Yamato and Musashi are often touted as being the largest battleships ever constructed, the fact of the matter is the Iowa-class battleships of the U.S. Navy matched or out-classed the Japanese ships in many respects.

With a designed top speed of 33 knots (41.25 mph), the Iowa-class battleships of the U.S. Navy could easily out-run the Japanese behemoths which were only capable of 27 knots (33.75 mph) at Flank speed.

Comparison of Yamato and Iowa-class Battleships:

Yamato was named after the ancient Japanese Yamato Province. Constructed from 1937 – 1940 and formally commissioned in late 1941, Yamato served as the flagship of Admiral Isoroku Yamamoto throughout 1942, first sailing as part of the Combined Fleet during the Battle of Midway in June 1942. Throughout 1943, Yamato continually transferred between Truk, Kure and Brunei in response to American airstrikes on Japanese island bases. The only time Yamato fired her main guns at enemy targets was in October 1944, but she was ordered to turn back after attacks by destroyers and aircraft of the “Taffy” light escort carrier task groups managed to sink three heavy cruisers during the Battle off Samar. during which Yamato‘s sister ship, Musashi, was sunk by the U.S. Navy.

How the mighty fall – Yamato assaulted on all sides by American aircraft
and submarines.

On 1 January 1945, battleships Yamato, Haruna and Nagato were all transferred to the newly reactivated 1st Battleship Division; Yamato left drydock two days later. When the 1st Battleship Division was deactivated once again on 10 February, Yamato was reassigned to the 1st Carrier Division. On 19 March 1945 Yamato came under heavy attack when American carrier aircraft from Enterprise, Yorktown and Intrepid raided the major naval base of Kure where she was docked.

Damage to the battleship, however, was light, due in part to the base being defended by elite veteran Japanese fighter instructors flying Kawanishi N1K “Shiden” or “George” fighters. Led by the man who planned the attack on Pearl Harbor, Minoru Genda, the appearance of these fighters, which were equal or superior to the F6F Hellcat in performance, surprised the attackers, and several American planes were shot down. Heavy antiaircraft defensive fire and the heavy upper-deck armour plating on Yamato also prevented any significant damage to the vessel. On 29 March, Yamato took on a full stock of ammunition, in preparation for combat off Okinawa in Operation Ten-Go.

Operation Ten-Go was a deliberate suicide attack against American forces off Okinawa by Yamato and nine escorts, beginning on 6 April 1945. Embarking from Kure, Yamato was to beach herself near Okinawa, and act as an unsinkable gun-emplacement—bombarding American forces on Okinawa with her 18.1-inch heavy-guns. Yamato carried only enough fuel to reach Okinawa, as the fuel stocks available were insufficient to provide enough fuel to reach Okinawa and return. While navigating the Bungo Strait, Yamato and her escorts were spotted by the American submarines Threadfin and Hackleback, both of which notified Task Force 58 of Yamato‘s position.

At 12:32 on 7 April 1945, Yamato was attacked by a first wave of 280 aircraft from Task Force 58, taking three hits (two bombs, one torpedo). By 14:00, two of Yamato‘s escorts had been sunk. Shortly afterward, a second strike of 100 aircraft attacked Yamato and her remaining escorts. At 14:23, having taken 10 torpedo and 7 bomb hits, Yamato‘s forward ammunition magazines detonated. The smoke from the explosion — over 4 miles high — was seen 100 miles away on Kyūshū. An estimated 3,055 of 3,332 crew members on Yamato were lost, including Vice-Admiral Seiichi Itō, the fleet commander. 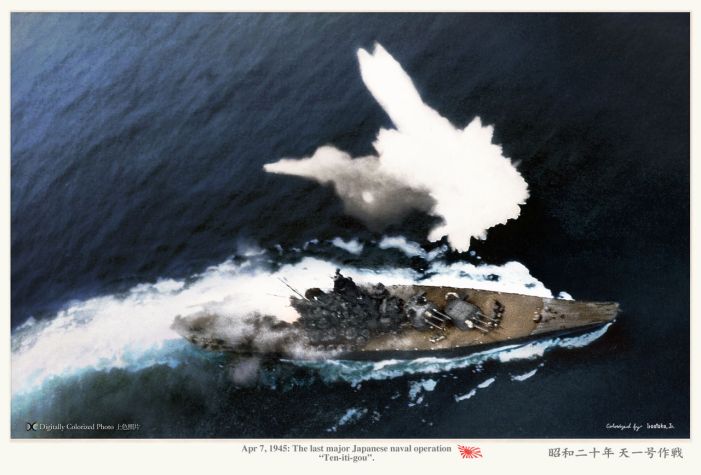 0800 hour – The Attack Force is sighted by a searching Grumman F6F Hellcat from USS ESSEX (CV-9). The Attack Force briefly sights seven “Hellcat” fighters, but they are not seen by the escorting Zekes.

1100 hour – YAMATO’s Type 13 air search radar operator reports contact with a large aircraft formation at his set’s maximum range of 63 miles. He reports the formation at bearing 180, heading north, and splitting into two groups. All ships increase speed to 25 knots and commence a simultaneous turn.

A report that had been delayed for 25 minutes by ransmission and decoding, is received finally. It says that the Kikaigashima Island lookout station saw 150 carrier planes heading northwest. Just then, eight F6F Hellcats appear and begin circling over the force to maintain contact until the main formation arrives. YAMATO and YAHAGI open fire, increase speed to 24 knots and commence a series of sharp evasive maneuvers.

Air search reports two groups of aircraft, range 44 miles, closing at high speed. The sky is still overcast and visibility is poor. Then radar reports the closing aircraft have turned towards the force. The Attack Force resumes zigzagging. The Attack Force turns to course 205, towards Okinawa.

Lagging behind the main force, destroyer ASASHIMO is attacked and sunk by aircraft from SAN JACINTO.

YAMATO opens fire with her two forward main turrets and AA guns. YAMATO stops zigzagging and increases speed to 24 knots. Her nine 18.1-inch guns firing Sanshikidan beehive shells, twenty-four 127-mm. AA guns and one hundred fifty-two 25-mm AA guns all open fire. The American planes release their bombs and torpedoes and strafe the bridge with machine-gun fire. YAMATO is hit by two AP bombs. Smoke rises from the vicinity of the mainmast and a bomb explodes in the same area. The aft secondary battery fire control, secondary gun turret and the air search radar are knocked out.

The Attack Force changes course to 100 degrees. Helldivers from BENNINGTON and HORNET attack from port. At flank speed, YAMATO commences a right turn but two 1000-lb AP bombs hit her. The first explodes in the crew’s quarters abaft the Type 13 radar shack. The second penetrates the port side of the aft Command station and explodes between the 155-mm gun magazine and main gun turret No. 3’s upper powder magazine. It starts a fire that cannot be extinguished and rips a 60-foot hole in the weather deck. One Helldiver is shot down, another is damaged badly.

A group of five low-flying Avengers (VT-17) from HORNET (CV-12) start a torpedo run from the port, bearing 70 degrees. YAMATO, at 27 knots flank speed, heels to starboard in evasive action. The Avengers drop three torpedoes. One strikes her port side near the forward windlass room. One Avenger is shot down.

1300 hour – YAMATO changes course to 180 degrees, due South. Her remaining air search radar reports the approach of a second attack wave. The Attack Force changes course due south to 180 degrees. Fifty aircraft from ESSEX and BATAAN are sighted approaching from the SSW, range 18.5 miles. YAMATO increases speed to 22 knots.

A Corsair from ESSEX drops a 1000-lb GP bomb that hits the superstructure in the port bow area. Twelve Helldivers claim several hits near the bridge and main gun turret No. 3. Five Helldivers are damaged by AA fire. Another 110 aircraft from Task Group 58. 4’s YORKTOWN (CV-10), INTREPID (CV-11), LANGLEY (CVL-27) engage the Attack Force. This time all the attacks are concentrated against the battleship. Twenty Avengers make a new torpedo run from 60 degrees to port.

YAMATO starts a sharp turn to port but three torpedoes rip into her port side amidships. Her auxiliary rudder is jammed in position hard port. YAMATO has taken a total of four torpedo hits. She ships about 3,000-tons of seawater. She lists about seven degrees to port. Damage Control counter-floods both starboard engine and boiler rooms and almost entirely corrects the list.

YAMATO starts a turn starboard to course 230 degrees. One of her lookouts spots the tracks of four torpedoes approaching. The first torpedoes pass by harmlessly, but the remaining two strike her port amidships. She takes on a heavy list to port and her speed drops to 18 knots. Armor-piercing and other bombs make a shambles of her upper works.

YAMATO turns hard to port. She continues to throw up a screen of desperate flak fire. One Avenger is shot down but her barrage is largely ineffective because each AA battery fires independently without coordination. The escorts cannot defend the flagship either.

Executive Officer Nomura Jiro reports to Captain Aruga that his damage control officers are all dead and that counter-flooding can no longer correct the list. He suggests the order to abandon ship be given. The Fleet Commander, Vice Admiral Ito, orders the mission cancelled and directs the remaining ships to pick up as many survivors as possible.

Light cruiser YAHAGI, hit by 12 bombs and seven torpedoes sinks exactly one minute after the last bomb hits. LtCdr (later Captain) Herbert Houck, the leader of 43 TBM Avengers of VT-9 from YORKTOWN, detaches Lt Thomas Stetson’s six Avengers in a final torpedo attack from the ship’s starboard side. Stetson’s crewmen reset their Mark 13 torpedoes’ running depth to 20 feet. Listing heavily to port, YAMATO’s exposed hull is hit by several more torpedoes. She rolls slowly over her port side on her beam ends.

YAMATO’s No. 1 magazine explodes and sends up a cloud of smoke seen 100 miles away. She slips under followed by an underwater explosion.
YAMATO sinks at 30-22 N, 128-04 E.

Vice Admiral Ito and YAMATO’s skipper Captain Aruga and 3,055 of 3,332 crewmen are lost. 276 men are rescued including Rear Admiral Morishita Nobuei, Chief of Staff, Second Fleet (and former YAMATO skipper). Aruga receives a rare double promotion posthumously to Vice Admiral on the request of Admiral Toyoda. Later that day, the battered destroyers ISOKAZE and KASUMI are scuttled and sink. 1,187 crewmen of DesRon 2’s light cruiser YAHAGI and the four destroyers are also lost.

The Imperial Japanese Navy ceases to exist as a fighting force. The Americans lose 10 aircraft and 12 crewmen.

Painting of Yamato as she sinks.