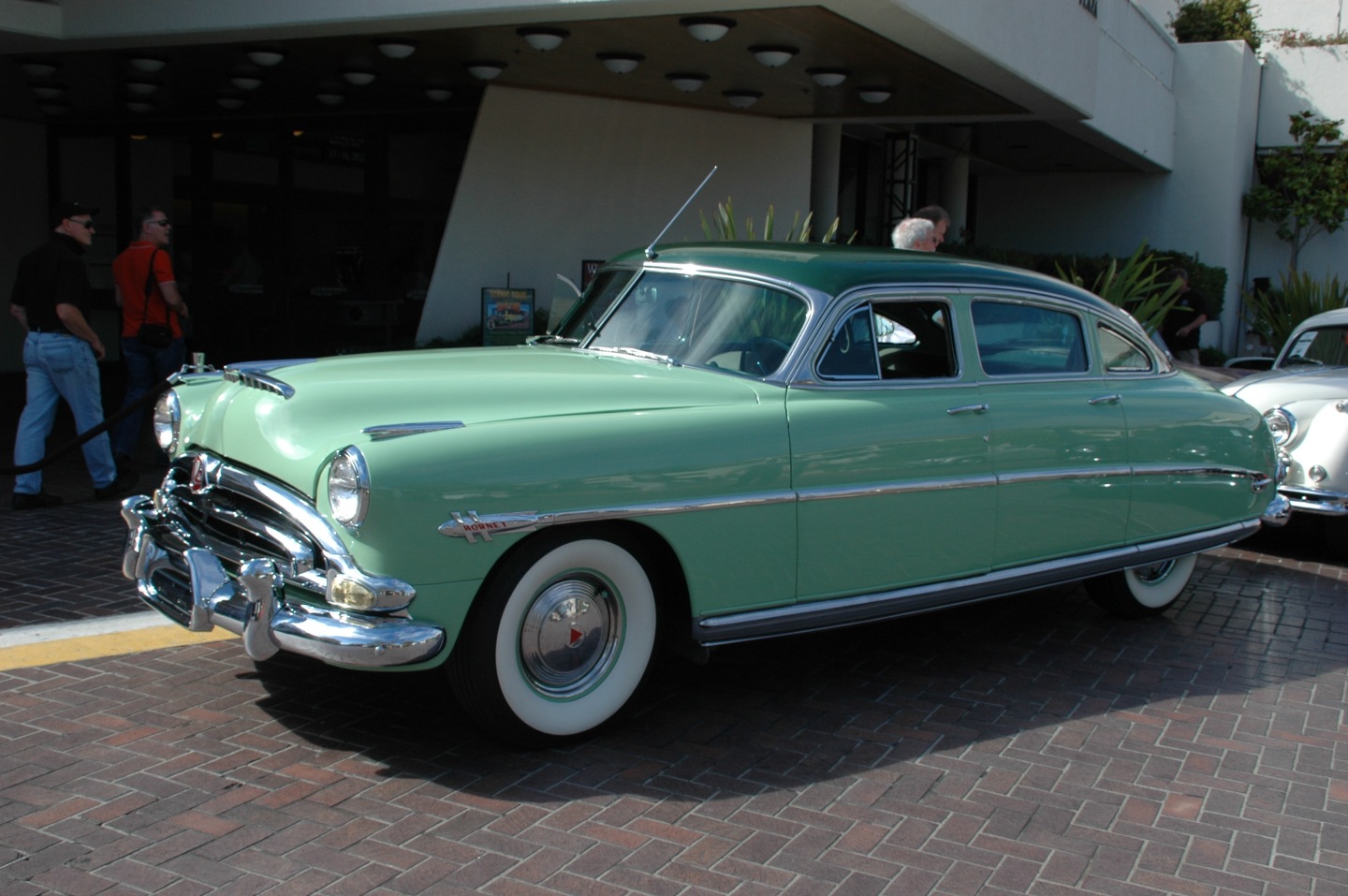 1953 Hudson Hornet fitted with the Twin-H Power engine. This car once belonged to the late actor Steve McQueen.

In December, 1947 Hudson introduced its all-new Step-Down series. Studebaker also introduced its all-new postwar model in late 1947, the two Independent manufacturers beating Ford, General Motors, and Chrysler and the other Independents to market with fresh new designs. Radical for its time and incorporating a number of advanced features, the Step-Down Hudson has made a lasting impression to this day.

Not an originator of unit body/frame construction, more of an early adopter, Hudson called its design Monobilt. (Chrysler had introduced unitized construction to the U.S. market with its poorly-received 1934 Airflow models.)

Hudson ads showing the strong unitized construction. Note that the frame rails at the rear are outside of the rear wheels.

Under chief engineer Millard H. Toncray, the company’s design philosophy was based on a property he called “roadability,” which emphasized ride, road holding, and passenger comfort on the less than optimal two-lane roads of the day—there were no Interstates then. As a result, the Monobilt structure was massively over-engineered and overbuilt for maximum stiffness and silence.

In another radical departure, the frame rails passed outboard of the rear wheels. This produced a tanklike structure capable of absorbing a tremendous pounding, as NASCAR racers would discover. The unusual chassis configuration also created an extremely wide rear seat, widest in the industry, but at the cost of a narrow trunk compartment.  The Monobilt body didn’t readily support a station wagon body style. In seven model years, Hudson never offered a production Step-Down wagon — an unfortunate gap in the lineup with the rapid growth of suburbia.

Above: Hudson shows off its wide rear seat and the car’s low profile in this ad. Below: note the rich fabric used on the seats of the ’53 Hornet once owned by Steve McQueen before his death. Hudsons were what we would now term “near-luxury” cars. The workmanship was excellent as was the quality of materials.

The use of unit construction also effectively took the Step-Down platform out of the light truck market, where Hudson had traditionally enjoyed modest but steady sales. But the most serious drawback of the Monobilt design was that annual model changes were limited to minor facelifts, since many of the body’s exterior hard points were baked in. This would prove critical as the Step-Down’s production cycle was extended into the early 1950s.

The floor pan was not fixed on top of the frame rails but to the bottom of the structure. Passengers stepped down into the cabin – thus the “Step-Down” name – simultaneously increasing headroom and lowering the roof height. At just over 60 inches, the ’48 Hudson was four to seven inches lower than its Buick, Chrysler and Packard competitors.

Instrument panel of the ex-McQueen ’53 Hornet. Through the ’54 model year, Hudson automatic transmissions were actually GM Hydra-Matic units. In ’55 and ’56, Hudson and Nash used Packard Ultramatic Drive transmissions until George Romney scrapped the component sharing program with Packard. ’55 and ’56 Nash-Hudson V-8s were also supplied by Packard.

Compared to everything else on the road in ’48, the Hudson Step-Down was low, sleek, and modern, with trendy bathtub styling created by Art Kibiger under design chief Frank Spring. General Motors’ Cadillac division obtained several Step-Down models for competitive analysis, but determined that the Monobilt construction method was too complicated and costly for its purposes.

In reducing the overall height, the Step-Down design also dramatically lowered the Hudson’s center of gravity, improving grip and handling. In the pages of Mechanix Illustrated magazine, America’s leading auto writer Tom McCahill raved, “This is America’s best road car by far.” NASCAR racers were also quick to exploit the Step-Down’s superior handling on the paved ovals and rough, rutted dirt bullrings of the South.

Hudson offered a variety of six and eight-cylinder inline engines over the Step-Down’s seven production years, but the most famous of the bunch was the H-145 Hornet six introduced in 1951. (Their inline eight was discontinued at the end of the 1950 model year.) Based on a high-chromium alloy block, the Hornet displaced 308 cubic inches — relatively enormous for a straight six at the time—and was offered in standard 145 hp form and in optional Twin-H tune with twin Carter WA-1 carburetors and an initial rating of 160 hp. The 1951 Hudsons dropped the previous model designations and adapted two famous-from-WWII names, “Hornet” and “Wasp,” after the U.S. Navy’s famous aircraft carriers with those names. 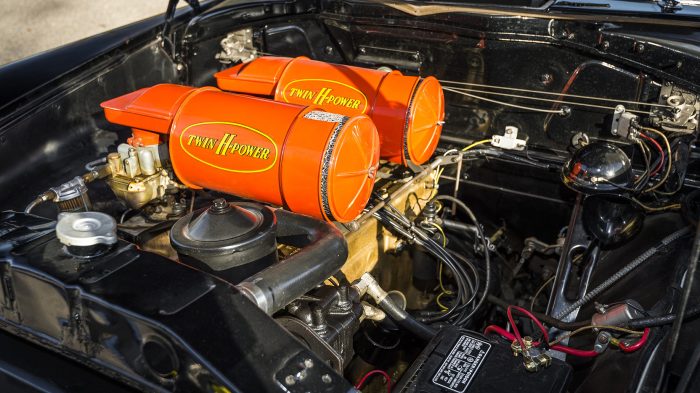 With the optional twin carbs, the big Hornet six could hold its own against the latest overhead-valve V-8s from GM and Chrysler. And once again, NASCAR racers were quick to seize upon the potential of the Hudson package, especially with the special 7-X high-performance components the factory quietly made available to the stock car racing crowd.

With their stiff, tough chassis, superb handling, and muscular engines, Hudsons were the sensation of the stock car circuits in the early ’50s. The Fabulous Hudson Hornets, as they were known, were the dominant brand in NASCAR and elsewhere in these years, driven by Marshall Teague, Tim Flock, Frank Mundy, and others. But arguably the most dominant performance was turned in by Herb Thomas and his crew chief Smokey Yunick. They went on a two-year tear in 1953-1954, winning 24 of the 71 races they entered and cementing Smokey’s reputation as one of the sharpest minds in racing.

Success on the racetrack did not translate into successful sales in 1953 and 1954 for Hudson. The intense price and volume war between Ford and Chevrolet in 1953-1954 took a horrible toll on the sales of all of the Independent manufacturers, sowing the seeds for the loss of Hudson, Nash, Packard, Studebaker, Kaiser-Frazer and Willys. (Studebaker stumbled on until 1966 and Willys’ Jeep survived, passed through a number of owners and is now Chrysler’s leading brand. Nash morphed into the Rambler and its eventual descendants became, along with Jeep, part of Chrysler.) 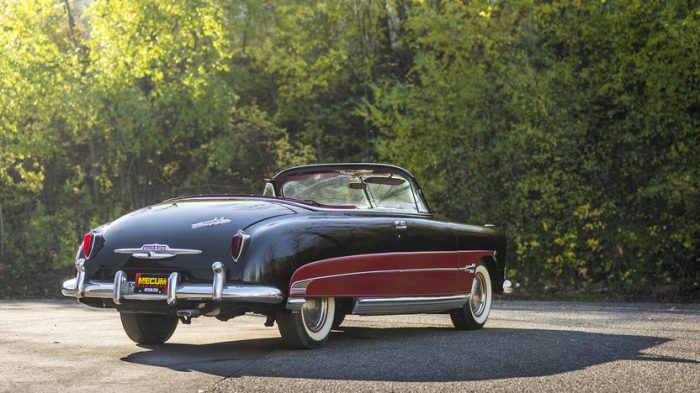 Hudson’s Step-Down convertible models were built in a novel way: Club Coupes were removed from the production line and wheeled into a special room. There, the roofs were amputated with a power saw and 230 lbs of body reinforcements were added underneath. For additional strength, Hudson’s convertible retained an extra nine inches of sheet metal in the windshield header area. Convertible sales were not terribly brisk for the Step-Down series, no more than a few thousand a year. Since the Monobilt construction did allow some body alterations above the beltline, Hudson also offered a pillarless hardtop style beginning in 1951, labeled the Hollywood.

As the Step-Down’s production was extended into the early ’50s, the once-advanced design became dated, and sales declined from the series-high mark of 151,000 units in 1949 to 80,000 units in 1952 — and kept falling from there. For 1954, Hudson designers did what they could to raise and square off the fender lines in an attempt to disguise the formerly stylish bathtub styling, but with little response from car buyers.

The Step-Down Monobilt platform was in need of a complete redesign and retooling, which the company could no longer afford due its rapidly deteriorating state. (Among other missteps, the company had invested heavily in the misbegotten compact Jet model that failed to sell.) In March, 1954, Hudson reported a loss of more than $10 million in 1953 compared to an $8 million net profit the year before. On 5 May 1954, Hudson merged with Nash-Kelvinator to form American Motors – part of Nash boss George Mason’s grand plan to merge Nash, Hudson, Studebaker and Packard to form the fourth full-line automaker. A chain smoker of cigars, Mason fell ill with pneumonia and died before the Studebaker-Packard half of the merger could be completed. Mason’s sudden death left George Romney in charge of the newly-minted American Motors. 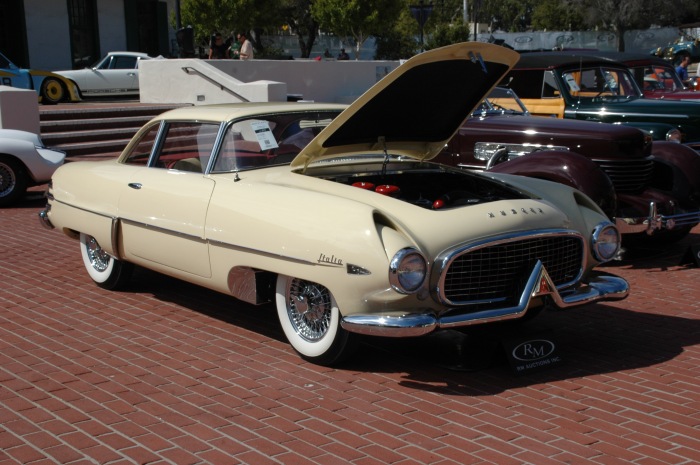 Above: a very rare Hudson Italia sports coupe, one of only about 50 built. Below: a “Hash” – a ’55 Nash Ambassador badge engineered into a Hudson. 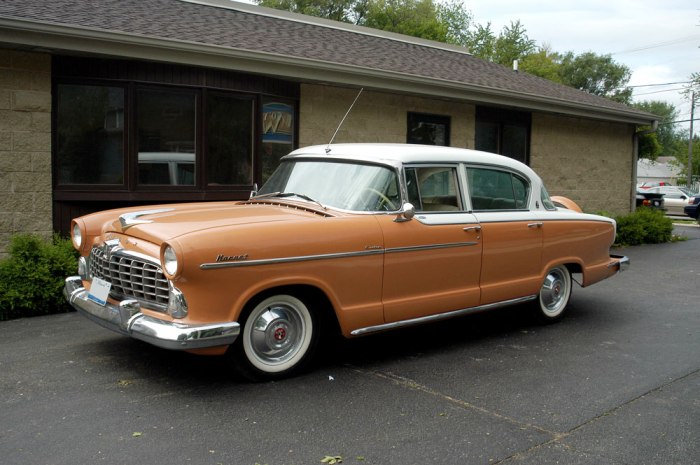 Romney had no use for the full-size Nashes or Hudsons and backed out of completing the merger with Studebaker-Packard. He also welshed on the component sharing program with Packard. Intent on his Rambler-Is-The-Future-of-American-Motors program, Romney also killed off the Nash-Healey sports car and the Hudson Italia sport coupe. The Hudson plant in Detroit was closed and “Hudsons” based on the Nash Ambassador body, “Hashes,” were in the Hudson showrooms in 1955-1957. The last car bearing the Hudson name rolled off the line on 25 June 1957 – one year to the day after the last true Packard was built in Detroit. It is ironic that the loss of the home grown Independent makers in those years opened the door for the Japanese invasion on the ’70s-’80s.

This post used an article at Mac’s Motor City Garage as a starting point. That article was revised and expanded upon. 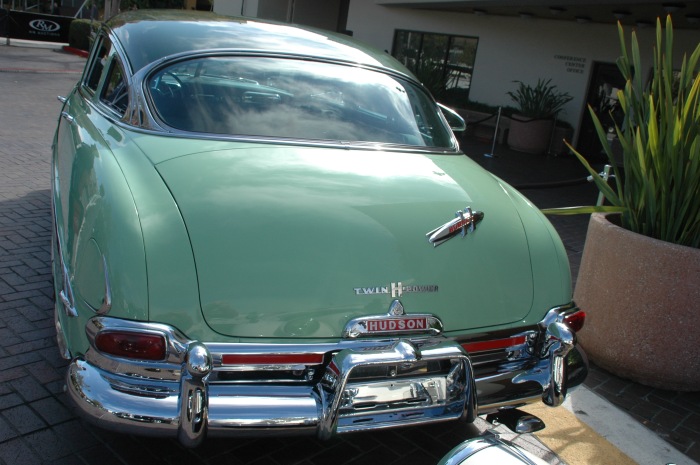