“The doyenne of design”: Helene Rother

Helene Rother was one of the first women to work
as an automobile designer.

Born in Leipzig, Germany in 1908, Helene Rother’s story sounds as though it were ripped from the pages of fiction or the screenplay of a harrowing World War II drama directed by Steven Spielberg. She was in Paris at the outbreak of World War II and made her way out of France just as the Nazi hordes begin their invasion. She boarded the first outbound ship she was able to get a ticket on and found herself in Casablanca with her seven-year-old daughter, Ina, in tow. Living in a refugee camp in Casablanca, she was unable to leave due her lack of a visa. Bogart didn’t step in to rescue her, but her own grit did. Finally, miraculously, she ended up living the paragon of the American Dream as one of the earliest female automotive designers, joining General Motors’ famed design staff in 1943 and then, in 1947, opening her own design studio and forming a successful partnership with Nash Motors. The remarkable story of Helene Rother is far from fictional, however, despite bordering on the fantastic.

Helene Rother seemed to be a born artist. While accounts vary as to whether she studied at the famed Bauhaus or Kunstgewerbeschule in Hamburg, one thing is indisputable: she had an eye for stylish design. Working with everything from furniture to jewelry, fashion to stained glass, she made a name for herself after having moved to Paris and embarking on a career within the city’s high fashion market. However, by the end of the 1930s it became clear that France was no longer what it once was. With the looming specter of Nazism casting a long shadow over the whole of Europe, Rother fled Paris with her young daughter.

In 1941 Helene Rother was in New York, safely away from the conflagration in Europe and North Africa. Here she put her artistic skills once more to good use, landing a job as an illustrator for Timely Publications (later, and certainly better known, as Marvel) drawing an early Marvel character by the name of “Jimmy Jupiter”. In 1942, she spotted an advertisement General Motors had placed in The New York Times for an interior designer. With pluck and determination – and no experience in automobile design – Helene applied for, and got, the GM job working for the legendary Harley Earl. With her daughter in tow, she moved to Detroit, found an apartment, and began designing interior trim for GM cars. “At first we lived on 999 Wetmore Road, then later she bought a house on Chicago Boulevard,” recalls her daughter Ina. She had a “selling personality,” said Ina of her mother. “She was not a shrinking violet,” and acted more like Humphrey Bogart than Ingrid Bergman”. Rother was also a true beauty, her blonde locks curled into face-framing coils above dark suits. At GM, Helene was responsible for all manner of upholstery, fabric, lighting and hardware – all more or less in her already-established wheelhouse.

Helene Rother at work in her home studio in Detroit.

This being 1942 and Rother being a woman, however, her quick success did not sit well with many in the male-dominated automobile industry. At the time, it was reported by The Detroit News that she was not only one of Detroit’s first female automotive designers but also collecting an unheard-of $600 per month (roughly $8,500 in today’s money). Given the tenor of the times, GM was quick to downplay the report due to the progressive idea of having a woman not only working in a male-centric field, but also making more than the average man. After four years with the company, she had stockpiled enough capital and name recognition to open her own design studio. If her position with GM was seen as radical, one can only imagine how this follow-up move was perceived.

Continuing her work as an interior stylist, Rother’s first independent account was with Nash-Kelvinator. Here she continued to refine her work on interior colors, fabrics and assorted hardware (no doubt bringing to mind her pre-war period as an in-demand jeweler).

Having an energetic personality, Helene Rother was always in a rush. She was routinely pulled over for speeding and got in multiple in fender benders. When she went to work for Nash-Kelvinator, she bought a new Nash car to match her new role  -  and promptly totaled it. Later she owned a Nash Rambler and then an Ambassador, which she also totaled. “She was always in a hurry,” recalls her daughter,” and she really wasn’t a very good driver. Anyone who ever rode with her would tell you that. She drove fast.”

Given Helene’s origins, she managed to bring a bit of European flair to the Nash brand, helping engender the automaker with an air of fresh, modern style. Her first efforts for Nash showed up in the 1948 Nash 600 and Ambassador Custom trim. Once known for being somewhat stodgy in its styling approach, Nash was soon featuring some of the most stylish interior colors and trim in the business. Helene Rother knew what women looked for in a car. In her soft French accent she noted that, “Everywhere I travel in America I hear women saying…’give us a car we can get into and out of without looking funny… seats we can lean back in… seat covers we can wash and clean. Pretty colors.'”

Ms. Rother worked on all U.S.-produced Nash cars of that era, including the new Rambler that debuted in 1950. Unlike Kaiser-Frazer’s stark little Henry J, Rambler quickly gained an image as a high-fashion small car. Just about every road tester of the day commented on the fineness of Rambler’s trim. “Modern design ees ze last fortress of man,” Ms. Rother once said. “Eet ees too masculine, too cold, without ze small feminine touches….” In an era when the majority of women didn’t work outside of the home, Ms. Rother held an important job that sometimes included travel. She toured the 1951 Paris Auto Salon on behalf of Nash, meeting with Italian designer Battista Farina, and reporting on the show for The Detroit News. As one might expect in a French woman, Helene loved clothes and had an innate sense of style. In photos she’s usually very stylishly dressed. 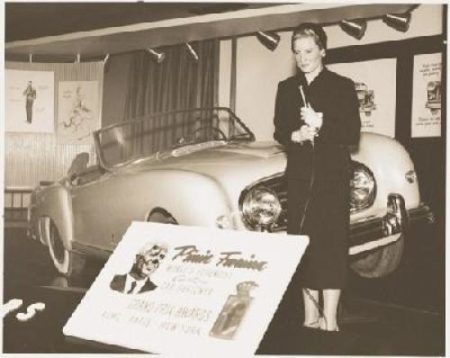 Helene Rother with a Nash-Healy. Note the Pinin Farina poster.

By 1953, she had helped Nash win the coveted Jackson Medal, “…since 1898, one of America’s most sought-after awards,” according to an advertisement, for excellence of design. In the ad, she appears with Pinin Farina, graphic proof of the European influence on Nash styling. Her name was featured prominently in automotive advertisements as “Madame Helene Rother of Paris”. She was a brand.

Rother’s work to spice up Nash interiors had a parallel at Kaiser, where Carlton Spencer came up with some of the most imaginative auto interiors ever produced.

Following the merger of Nash and Hudson that resulted in the formation of American Motors, she continued working for a number of automotive-related companies including Goodyear, B.F. Goodrich and Miller-Meteor, the latter a company known for its ambulances and hearses.

In her time, she achieved a great deal of success and recognition and, like many a female pioneer, helped open the door to women in an industry from which they’d been previously shut out. By time she died in 1999 at the age of 91, Rother had spent her later years designing stained glass windows for churches, providing color and style for a whole new type of interior. Contemporaneous with Helene Rother at Nash was Audrey Moore Hodges who began in 1944 at Studebaker and later designed the interior of the short-lived Tucker.

Another woman pioneer of automotive design was Betty Thatcher Oros who began at Hudson in 1939. She worked mostly on Hudson interiors through 1941. As her husband, Joe Oros, was working as a designer at Cadillac, she resigned from Hudson to avoid a conflict of interest.

In 1952, Packard hired Dorothy Draper (the Martha Stewart of her day – without the baggage) to spruce up the interiors of its cars. Packard followed Draper’s work with Mary Ellen Green, who did much of the interior work on the ’55 and ’56 Packard Four Hundreds and Caribbeans, including one of the industry’s first attempts at ergonomic seat design.

Publicity shot of the beautiful 1954 Nash Ambassador – one of the best designs for the early ’50s. Helene Rother did much of the work on the interior design while Pinin Farina was very involved in the exterior design.

Helene Rother at work on a design for Nash.