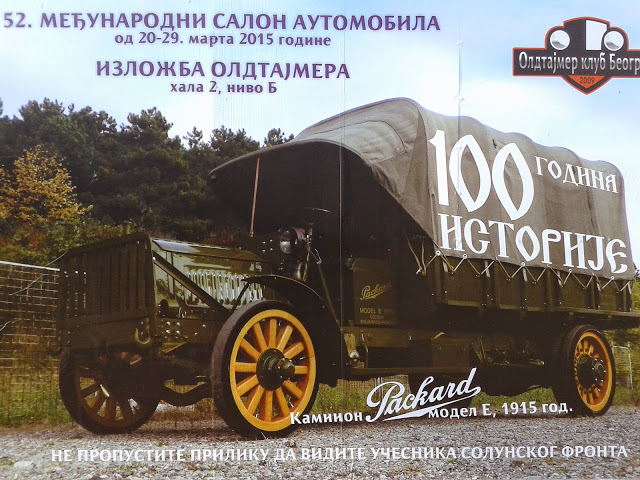 A tip o’ th’ hat today to “Gordon K.” for inspiring this post! 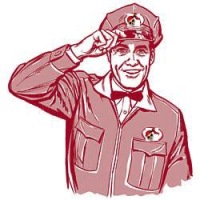 This photo of the 1915 Packard truck found in Serbia was posted at PackardInfo.com

A seldom remembered part of Packard history is that they built trucks!

For readers unfamiliar with the history of the Packard Motor Car Company, we will begin today’s post with a snapshot of Packard history including a brief look at their entry into the truck market.

The company was founded in 1899 in Warren, Ohio when James Ward Packard and his brother, William Doud Packard built their first car out of unhappiness with their experience with a Winton automobile. The Packard brothers had a successful and thriving company that made electrical components, particularly wiring. Now, with the formation of the Ohio Automobile Company, they added cars to their portfolio.

The company grew rapidly, having established itself as a builder of reliable luxury cars. At the urging of investor George Weiss, the automobile portion of the company moved to the budding Motor City, Detroit. Industrial designer Albert Kahn designed the new Packard factory. As the car building segment of the Packard brothers’ business prepared to move from Warren to Detroit, the name was changed from the Ohio Automobile Company to the Packard Motor Car Company. The Packard Electric Company (also known as Ohio Electric) remained in Warren.

From the very beginning, Packard featured innovations, including the modern steering wheel and, years later, the first production V-12 engine and, in 1940, air-conditioning as an option in a passenger car.

Among the investors in the Packard Motor Car Company – and one of the chief proponents of the move to Detroit – was Henry Joy. In 1903 in Detroit, Joy saw a motor truck and realized that the automaker should also enter the truck market.

Henry Joy put Packard into the cutting edge of the fledgling truck market: only 700 trucks were produced industry wide in 1904 against a total industry output of 22,000 cars. By entering this new and growing market early, Packard was able to claim a significant piece of the truck business. The Marshall Field Department Store in Chicago and the John Wanamaker Department store in Philadelphia used Packards as their delivery trucks.

Packard put a truck in the hands of the U.S. Army in 1909 for field maneuvers in Massachusetts. During a particularly wet and rainy period during the maneuvers, the Packard truck demonstrated its ability to reliably haul both supplies and men. Another Packard truck had been fitted with a rapid-fire automatic three-pound cannon, reported to be the largest automatic gun in the world at the time. The Packard truck proved to be a stable and reliable platform as a mobile gun mount. Nonetheless, the Army preferred its horses to horseless carriages – or trucks. It took the conflagration known at the time as The Great War to convince the Army of the need for trucks.

As the U.S. became engaged in the war in Europe, Packard did its part by building the Liberty V-12 aircraft engines and supplying the U.S. and Allied Armies with motor trucks. Packard shipped General Pershing’s forces in Europe some 10,000 trucks; smaller numbers went to other Armies in the fight against Kaiser Wilhelm II. Russia received 3,000 Packard trucks. Packard trucks went to Great Britain, France and Italy.

The featured Packard truck today is a 1915 Model E which found its way to modern Serbia during World War I. This truck was used on the Thessaloniki Front and in attacks that followed through the heart of Serbia liberating German occupied territories. 100 years later this vehicle was found in Lapovo, Serbia, half covered with earth and vegetation.  The Hadzic family, who accidentally discovered the vehicle, employed top-notch mechanics and the Hakos Restoration shop in Belgrade to bring this Packard truck back to life.

The Packard was restored to the last detail. Restoration completed, at the Belgrade Auto Show, the engine fired up with only half a turn of the crank. The engine is a water-cooled T-head inline four of  350 cu. in. (5,734 cc) displacement, twin camshafts and dual ignition and makes 32.4 horsepower. These trucks had mechanical brakes, a top speed of 17 MPH but most importantly, they could run 24 hours a day as opposed to a horse which needed to sleep!

Following the war, many of the trucks that had been sent to Europe were “repatriated” causing a glut of trucks on the market. Naturally, prices collapsed. As a result, Packard decided to devote most of its energy to its automotive business and quit building trucks in 1923, though the company continued its aviation and marine engine businesses.

It is nice to see that this Packard truck, found in the unlikely place of Serbia, has been so lovingly restored.

Portions of this article were adapted from Packard – A History of the Motorcar and Company, edited by Beverly Rae Kimes. Additionally, some of the text was adapted from the description of the truck at the YouTube post.

REVISED and expanded:
Bud Juneau, who is effectively the official photographer of Packard events writes:

Enjoyed your blog on the Serbia Packard Truck. The man who restored it passed away just before it was finished and his son Sasa and wife Branka finished it in his honor. Dave Lockard, who is the number one Packard Truck guy in the world, holds a Truck Meet at his farm the day after Hershey was good friends with the father and helped them all with the restoration. Sasa, Branka, and Dave (middle in photo below) were at the Packard Club tent at Hershey this year, as well as the truck meet, and I shot this photo of the three of them. Sasa and Branka are delightful people and it is great to see younger people in the Packard hobby.

In 2007 I learned of the Packard truck owned by Sait Hadzic in Serbia that was sorely in need of work & parts. The origin of Sait’s Packard was that it was given to the Serbian Army by the French Army following the end of the ‘Great War’. At some point in time Sait acquired the Packard. A good friend of Sait Hadzic by the name of Vojin Sevic called me up from Belgrade in 2007 and asked if he could come over to York Springs, PA (just above Gettysburg) to take pictures of my three Packard trucks for Sait. Vojin & Sait learned of my trucks as both had seen pictures of my trucks on-line (I did not post them as I am barely literate in computer science.)

The late Sait Hadzic (he is in the picture below – on the left in a red shirt) was given a number of Packard truck parts by me during the period of 2007 to 2014. In 2010 Sait actually came over from Belgrade, Serbia for Hershey and the Packard Truck Meet. In 2010 while here, Sait was given additional Packard truck parts by me. At Hershey in 2010 Sait bought an original excellent condition 1927 Hudson ‘Super Six’ at the Car Corral which I kept in my shop until November 2010 when it shipped. The Packard truck parts for his Packard back in Belgrade were stuffed into the Hudson for shipment back to Serbia.

This year Sait’s son Sasha (also spelled Sasa) and his wife Branka stayed with us in York Springs, PA for Hershey. Sait had finished his Packard truck in April of 2014 and sadly passed away just one month later after a long battle with leukemia. Sait was a neat guy – and loved his Packards! Sait also owned (his son now owns) a 22nd Series Packard convertible that was one of President Tito’s parade cars.

Prior to his passing Sait restored & sent me a Yugoslavian built Zastava 750 (essentially a Fiat ‘600’ made under license) as a ‘thank you’ for the Packard truck parts I had given him (picture of the Zastava with Branka and Sasha leaning on it – picture taken at the 2017 Hershey Show field after the meet). I had asked Sasha to come over for Hershey 2017 and drive the Zastava onto the show field – which he was thrilled to do. The Zastava earned a ‘First Junior’ @ Hershey in 2015 and in 2017 received it’s ‘Senior’ award – which made Sasha thrilled!

Here is a footnote of information for you – from 1905 to 1923 Packard Motor Car Company manufactured 40,000 trucks (all PMCC manufactured components as opposed to an ‘assembled truck’ using engines, etc. from suppliers) – from 1 to 6 1/2 tons in size. The US Army alone owned 10,000 Packard trucks. In 1915 PMCC sold more motor trucks than cars as many if not most went to our Allies in England, France, Finland and many others for the war effort.

Courtesy of “Chris-to-Fear” we continue with photos of old gas stations at
Curbside Classic. Today: a ’63 split-window Corvette being fed at a Mobil station.